Well, for me it's the best heavenly6 album. I like all songs. I wasn't so excited about this release before preview came out. Can you hear me? and forever and anywhere are songs. Also I like punk sound of MILK TEA. Ash like snow sounds ok but after hearing it I understand how heavenly sounds buriguri version. Vocals in ICE CREAM HEAVEN FOREVER sound like in PINK ARMY. It's funny. Ruby eyes became better than it was before the album release. It's good song in general but bad single.

I'd say it's a step back in the "heavenly6" sound, but not a bad thing.
Since Heavy Starry Heavenly her sound was becoming heavier (specially drum-wise lol) and TOMMY ICE CREAM sounds a lot more like her debut album.
I feel lots of the melodies and arrangements are recycled but the songs are fierce on their own.
Favorites: ICE CREAM HEAVEN FOREVER, forever and anywhere, I WANT YOUR BLOOD†
Least favorites: MILK TEA, Can you hear me?

I'm drowning in the waves of nostalgia this album gives me. While I hoped she would continue the heaviness seen on february & heavenly, overall this is an amazing album. Sooooo glad she decided to do Ash Like Snow. And the 4 songs in full English are so wonderful. Both music videos are great, but she has done better.
ICE CREAM HEAVEN FOREVER may be one of the best songs she has ever done. Those English lyrics are just fantastic. This album further enforces why Tommy heavenly6 is my favorite music of all time!
_________________

I like it. It's been in rotation since it arrived, which I can't say for one or two of the past albums (*cough* I Kill My Heart *cough* - I actually listened to all the heavenly stuff last week in anticipation and realised how few of the songs on that album I was familiar with, but I digress).

With this album, I do think it's running on steam, I mean some of the songs are just straight up carbon copies*, but that doesn't make the songs bad per se, they're good, well crafted songs - but there are no surprises on the album, so it's difficult to feel too strongly about it either good or bad.

I like when artists have a cohesive sound, a vision, a mission statement - Tommy clearly has several of each which is also great, I love alter-egos and project albums, this album just doesn't blow my socks off, and I always want to be blown away by my favourite artists - because I think they have it in them to give 110%. I'm a tough but fair critic I think.

What I would like to see next from Tommy: A Tomoko Kawase album.

Spoiler:
- Let Me Scream begins EXACTLY the same as Swear.
- Lovin' You starts very similar to Pray
- Intro to Forever & Anywhere reminds me of Hate Your Lies (one of my favourite heavenly tracks btw)
- Can you hear me? = Hey My I Love Xmas Friend, obviously!
- Ruby Eyes reminds me somewhat of Papermoon, etc, etc - I could probably go on.

I feel like it's okay. There's nothing particularly new or stand out about it. It feels like she's just rehashing the same thing she's done time and time again. I want nothing more than to like this album, and it is in fact the first release she's ever done that I didn't care too much for. I keep going back to it every couple of days thinking it will start to grow on me, but it hasn't yet.

I love the idea of her trying heavier music though. That's what I liked about "Call me princess" and "Hate your lies" but it seemed to me that with this album they simply had an idea, but didn't quite know how they wanted to execute it. But that's just me. 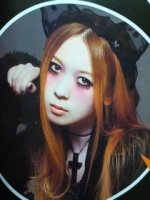