Why has their image become more important?

Anunnunie wrote:Now I'm even more confused why they haven't released their next awesome single!

Anunnunie, never it was a matter of a next single !!

This unproven single is part of the rumour !

The only thing we know is that they are working on studio (as mentioned on the very short interview while "Re-Style" event the past 5th June, check my site if you want) and for the moment we got only "All Through The Night" since this info !
But a lot of us strongly think that they are working on next album, maybe a single ... but there isn't official news about that ... well as far as I know for my part !

I came here for replying the topic Sergius first brought.

The truth is 1.) Rock band music are getting shrinking in Japan, and female singer is raising constantly. 2.) Since the day Tommy february6 got born, the record label totally realize Tommy is the key member among three of them. 3.) Like Kilix told, the major part of the fans is like Tommy, minor part cares about who wrote the songs. Eveyone saying how beautiful she is(lol count me!).


I will reply to other comments later ^_^ it's a good serious topic I've ever seen! 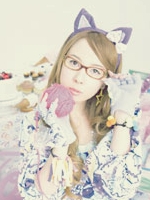 I've been re-reading the topic and I've found very interesting points of view about the point I was trying to make.

Now I think that image is quite important for a band, especially in japanese mainstream market, (although we should never forget that it is not the most important part of it). What surprises me is the fact that since their comeback as a band, they have made some obvious changes in the way they portray themselves as a band, focusing so much in looking fancy , and wearing cool clothes, also placing Tommy as the main character, and to some extent heavenlifying the image and sound of the band in their last single.
I believe their intention is to please the fans by doing so, but I honestly miss the days when they were (or seemed) less concerned about being popular, and were doing their own thing instead, even when they did very cheap videos like I'M SO SORRY BABY, they seemed more natural to me. just 3 friends making good music together.

I feel that fans are quite divided nowadays, between those who love the old stuff and those who started getting into them through heavenly6, maybe when she did openings for anime, and these fans are okay with the anime look, and with heavenly and the gothic lolita-ish style kinda thing tommy's been looking lately. and all they want is tommy tommy tommy, and instant hits, but for those who like their early stuff this evolution can be a little shocking. At least it is for me.

I miss the old style of their album and single covers too, that's another story

I don't really like the way you worded that. you made it sound like people who like their newer stuff, and Tommy's awesome clothes are shallow, and aren't good fans or only like them cuz they like heavenly. That's SO not true. I love their old stuff, but I also love their new stuff. I'm also into fashion and IMO the fashion in their earlier videos was boring! yeah tommy looked good in that simple red dress in twblt, but it's tommy she can make an Adidas track suit look good. So obviously it's going to look good. I think it's great that Tommy is becoming more fashionable, and don't think the fact that she's making herself, and the guys look awesome is a bad thing (I mean c'mon Ash like snow's clothes! just to die for! military style is one of my favorites!).Also Ash like snow does have heavenly sounds to it, but i still feel like it is a Brilliant Green song. It's like a Brilliant green with more electric guitar, and sound smore serious then most of heavenly's songs. Since a lot of hers are just silly and fun!

So while i disagree that Tommy being more fashionable, and taking a heavenly affect to them is bad, I do agree having Tommy being the focal point isn't the greatest. Although even from the begging, Tommy has had the most screen time PV wise...and everything y'know? weather it's as much as now or not, she was always the focal point.